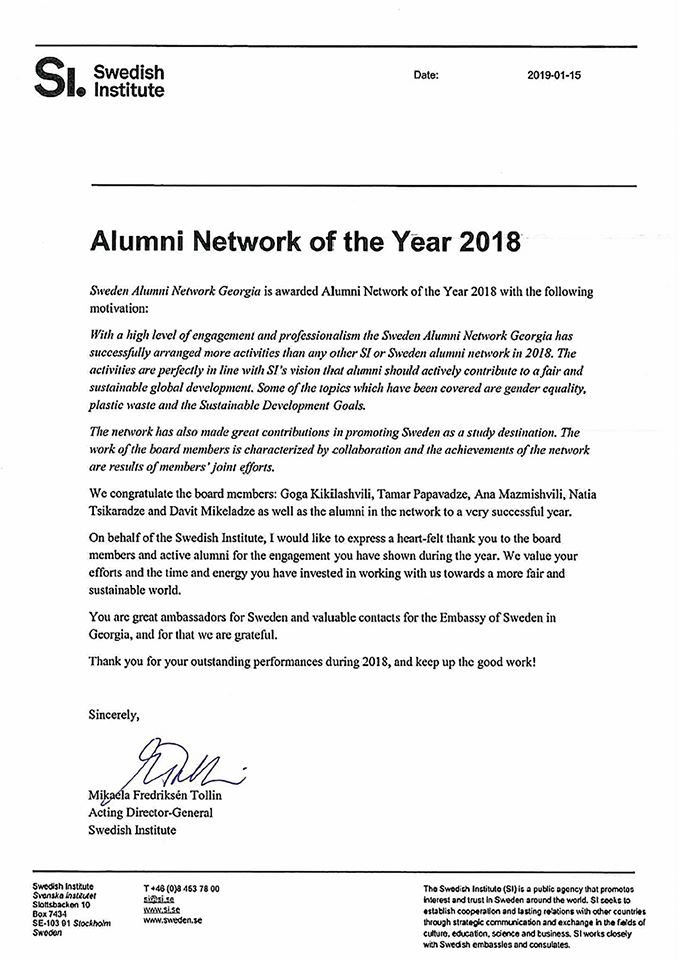 Sweden Alumni Network Georgia was officially launched in November 25, 2015 with great support of Swedish Institute and the Embassy of Kingdom of Sweden in Georgia. First it was launched as Swedish Institute Alumni Association in Georgia and later, since 2017 was transformed into Sweden Alumni Network Georgia and became open for all alumni who studied or made research in Sweden.

The official opening ceremony was attended by Ms. Ambassador of Sweden Ms. Martina Quick, Deputy Minister of Foreign Affairs Mr. Gigi Gigiadze and around 40 alumni whose contact information was reached by means of personal social networks.

The first Executive Board was made of the founders of the network and it was governed as by EB based on principle of collegiate governance.

In 2016 new members were added to the board based on decision of EB and the first Head of Network was elected by the EB.

Since term 2017 new model of EB formation was implemented, and EB is formed based on direct elections where all alumni are invited to participate in a general assembly. Elected EB member choose the head of the executive board and entire network.

Term 2018 was the most successful so far as Sweden Alumni Network Georgia was named by the Swedish Institute (SI) as the best network globally. It is especially important to highlight that this title was awarded for the very 1st time by SI and the Georgian network became the 1st winner in the history.

Since 2019 the network officially declared Sustainable Development Goals (SDG) as its priority and got oriented on global, long-term initiatives in terms of achieving Agenda 2030.